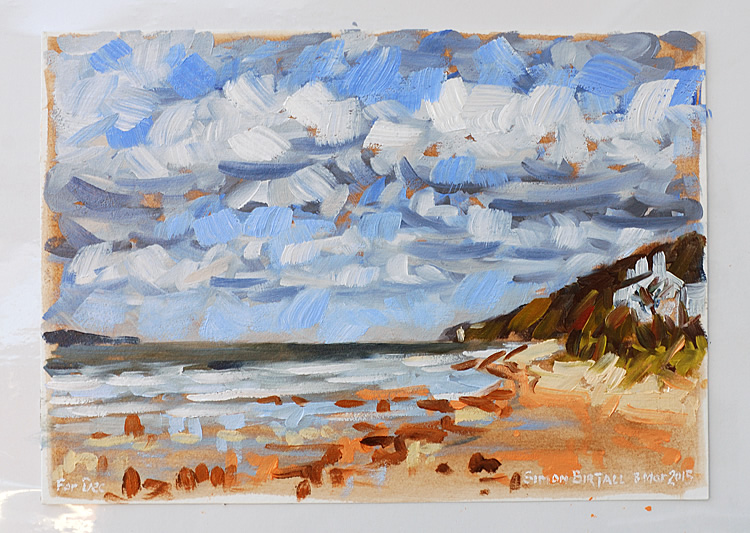 I have recently been doing some research into the working methods of John Constable in preparation for a forthcoming painting workshop, Big Skies, paying particular attention to his oil studies on paper and board.

Inspired to give working in oils on paper a go, this oil sketch, made yesterday, is the first result. The paper was prepared with a couple of coats of acrylic gesso and a Burnt Umber ground colour. Paint was applied fairly opaquely thereafter using a combination of broad (particularly in the sky) and finer brushmarks using Winsor & Newton alkyd paints.

Unlike Constable, I cowardly chose to work from photographs rather than working plein air. Working on location is something I have muted doing for years but never quite got around to for one reason and another. In a nutshell, I lack much of the confidence necessary and the home studio provides a safe haven, away from prying eyes. It might be argued that this ‘safe’ approach defeats the object to a significant extent, but it allowed me to test the surface and to formulate an approach which might suit plein air painting; I sought to capture some of the freshness and spontaneity of an on-the-spot study. Working fluidly, the sketch was completed in a little over an hour.

The sketch depicts a view up (or should that be down?) the Dee Estuary, looking towards its mouth from Thurstaston beach on the Wirral, encompassing distant Welsh headlands on the far left horizon and Sally’s Cottage in the right middle-distance. The reference photos used were taken in 2007 when researching an illustration project for Wirral Borough Council, the results of which can be seen here: www.birtall.co.uk/illustration/wirral/thurstaston.htm.

My godson Dec has been suffering badly with chronic asthma, and he was much in my thoughts as I produced this painting, which is dedicated to him (happily he’s on the mend).