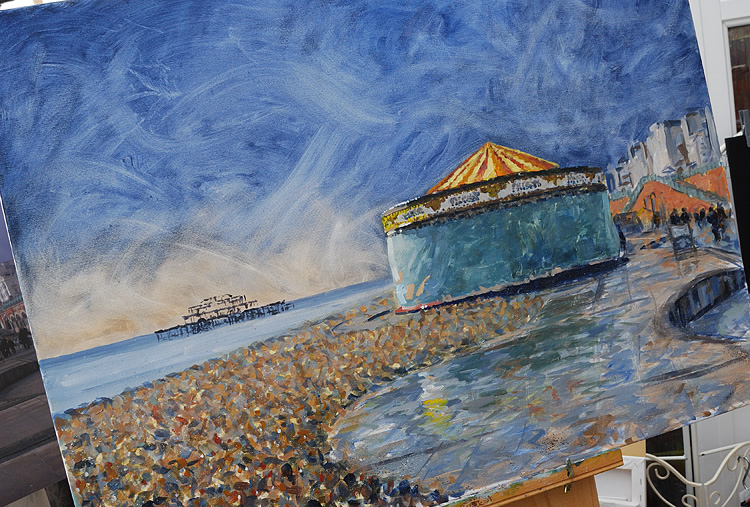 Prior to painting workshops I endeavour to produce example paintings. Photographing such work throughout their production, I then compile step-by-step guides for students to help them through the reproduction of the painting. In doing so I hope to demonstrate a logical path from start to finish and hopefully introduce students to some new ways of working that might help them with their future work. I try to produce my example pieces within similar time limits that I impose on my students – five to six hours for relatively complex compositions or two to three hours for less challenging pieces. However, this doesn’t always work as planned.

I ran a workshop yesterday entitled ‘Painting the Seaside’, for which I chose to base my example piece on a photograph of Brighton beach. The view encompasses a covered carousel in its’ centre, and the West Pier in the distance. It’s a scene that I’ve been keen to paint for many years, having taken the original photo seven years ago. The overcast sky, the light hitting the covered carousel, the wet reflections in the paving stones, and the pervasive damp summer day atmosphere all appealed to me.

I chose to work in Winsor & Newton alkyd paints on 24” x 32” Daler-Rowney canvas. Looking to complete the painting in around six hours, perhaps ambition and expectation got the better of me on this occasion. A session of around four hours on Monday was followed by a further three hours on Tuesday. Needing to complete the painting on the Wednesday in time for the workshop the following day, it was finally brought to a close in another hour’s work.

It’s difficult to gauge how I feel about this work. I failed to complete it within the imposed time limit of around six hours, but the unwise size at which I chose to paint was a major contributory factor in this. Having wanted to make this painting for so long, my expectations were very high and I can’t help but feel a lurking sense of disappointment with the way it’s turned out. I was far more pleased with my students work. However, satisfaction is often difficult to quantify immediately upon completion of a painting. It may be that I choose to do some more work on it at some point, or it may lurk in a dark cupboard for years before being re-discovered and reassessed as actually “not as bad as I remembered”. It may unfortunately still engender that same sense of disappointment. Time will tell.